Corners – Might just hide an interesting story we can learn from.

Our interaction with urban form and architecture did not begin at a desk in college or in a page of a magazine. We have been surrounded by it all our lives: your childhood neighborhood, your street, the park you frequent.  Sometimes it goes unnoticed and becomes mundane, but nonetheless, it affects our movement through and perception of space. As I wrote this article, I remembered certain moments tied to places I have not visited in a very long time. It reminded me where I come from and the culture that raised me, which in turn influenced my views on public spaces, or rather, design in general. These memories demanded a closer look and some investigation.

Here at JPA, the sum of these experiences shapes how each of us think about design. Our diverse team represents a collection of instances from different parts of the world. This intrinsic value is what enhances our design pool and embeds itself in the various projects we touch daily.

So next time you find yourself thinking of a past place or event, carefully look at it from a design perspective; it might just hide an interesting story we can learn from. 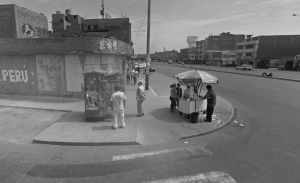 It was customary for our family to walk three blocks east from my grandfather’s home to the neighborhood chapel every Sunday night. We would walk down Peru Avenue in its buzzling scenery, street food smells, small neon light signs and encountering street vendors of various types at each intersection. My grandfather would not stop on the way to the evening service as he liked to get a good spot close to the altar for the pastor’s blessing, but on the way back he would let me pick something from the one of the carts. It was always the corners that gave the street the life it needed, beyond the colorful stores and excessive use of acrylic paints and neon lights for signage. They carried a balance of permanence and variety that the neighborhood gravitated to.

As far back as I can remember, corners in my district of San Martin de Porres have offered interesting sights around the clock. The informality engrained culturally allows for the corners along this prominent avenue to behave as powerful communal attractors, used for more than just bus stops or advertising space. The remarkable aspect of these contained activities is the ingenuity of the locals who seek an honest pay, thus transforming their 64 ft2 throughout the day.

This affinity for the corners could be the result of three factors: low number of suitable public spaces, no government regulations, and poverty.

The district has its share of parks and plazas. The problem lies in the detachment from the main avenues which carry greater business potential and foot traffic than small streets or alleys. This is combined with the growing crime in Lima and lack of personal transportation in the area, resulting in the community preferring a visible hangout spot relatively close to home. My grandparents lived in front of an ox-bow shaped park which was mostly accessible to the owners of the surrounding houses, although the park faced the avenue. Recently, the homeowners have agreed on a swing gate at the ends of the thru street and hired a guard to watch the properties and cars parked at night.

The proliferation of small business and casual events are reflected on the municipality’s absent street usage regulations as temporary retail grounds in this part of Lima. Might be a mutual understanding between the local authority and the people that these grounds are for true public use. No permit needed, no sanctions placed.

Lastly, more than 30% of the districts population live close to the poverty line with little education and see these corners as grounds for economic sustain. The owners of the corner businesses know this and allow cart vendors to occupy the front which in turn attracts foot traffic into their stores. A symbiotic relationship.

Entrance to the ox-bow park with the gates swung open during the day. A keysmith cart occupies the sidewalk. 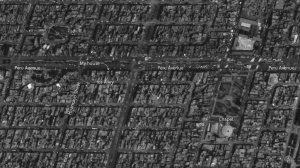 The Spanish gridded district of San Martin de Porres rests just north of Lima’s center and is located between two rivers: Rimac (south) and Chillon (north). The valley’s development was part of the city expansion in the 50’s which initially created 3 residential zones to relocate Andean families due to a severe drought. The developments along the Rimac river serve as a buffer into the outskirts of Lima, largely populated by mid to low income families.

Just a few blocks north of the southern boundary is Peru avenue, a main east-west connector, traversing the district’s width. This is where my childhood home was located, facing the avenue in the middle of the block. The avenues follow a mixed-use format containing residential with mid-size businesses like restaurants, automotive repair shops, and franchise pharmacies.

Branching out perpendicularly from avenues like this one are smaller streets, still mixed-used but mostly residential. Small, private business are found like tailors, local bodegas and pharmacies, scattered along the many blocks. Connecting the streets are jirones, or alleys running parallel to the avenue with much less car traffic, making for an inviting setting for street soccer games and small neighborhood festivities. Many street vendors come from these alleys and streets. At different times of the day one can hear carts being pushed to the avenue and some returning to the alley. 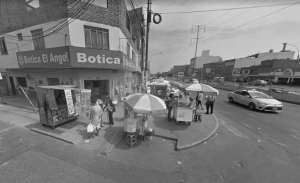 This is the corner I frequented when I was young. Surprisingly, the street and avenue have not changed much over the 16 years I have been away from Peru. The only visible change is the business at the chamfered corner, which used to be a dollar exchange house. It is now a botica (similar to a convenience store), but the cross next to the name indicates that is a pharmacy as well.

The versatility of this space is remarkable. Small but productive, the corner in front of the botica accommodates the newspaper stand in the morning along with the commuters waiting for the bus, the food cart and the ice cream man in the afternoon, and the emolientero selling his drinks at night. Often many vendors overlap creating a temporary market as seen in the picture above.

I recall a Sunday afternoon, my friends from the neighborhood and I had been playing street soccer for quite a while in Jiron Ica (parallel to Avenida Peru). We decided to stop at this corner and buy ice cream from the D’Onofrio cart that was taking down his umbrella. As he dug through his dried ice bags, Clara was setting up the grill, some chairs and tables, and a pop-up tent. She lived next to the dollar exchange house and cooked typical grilled dishes for the returning crowd from the neighborhood’s chapel. Her family is descendant from those farmers that occupied the Lima’s expansion during the 1950’s. This evening business was extremely important for her family economic sustain and it helped that she was a great cook. Seeing the tent go up was a sign to run home for the chapel’s evening service.

On the way back, we would see the emollients cart stationed next to Clara’s tent. The “emolientero” was Cesar and he came from farther down Huancayo street and owned a small shoe repair shop. The duo shared the tent because Peruvian grill goes well with his drinks.

The few times we sat and ate there, the corner took on a different atmosphere from earlier in the day. It felt more intimate. Enclosed to a degree because you could still catch a breeze, but the warmth from the grill was felt, the dim lights hung from the tent’s frame, and the street sounds filtered through the sizzling grill. The local gastronomic hub on the neighborhood was open for business.

Later that evening, a different crowd settled. Older males talking about sports (mainly about the national soccer league) and politics over the beer bought from the bodega a block away. Cesar had already headed home by this time leaving more space for Clara’s grilling operation, now assisted by her eldest son. The corner turned into an impromptu bar until high hours of the night.

Since I did not attend school during summer, the next morning I left the house holding my grandfather’s hand and walked to the corner. The small area was bursting with commuters waiting on their buses. Beside the crowd was the newsstand, displaying neatly stacked magazines and papers along with assortments of candy. A closer look into the shifting crowd, the “bread lady” appeared sitting behind a basket full of warm bread covered by a white cloth. My grandfather started some small talk and gave her a few coins and a bag. While she readied the order, my grandfather was already buying the newspaper. 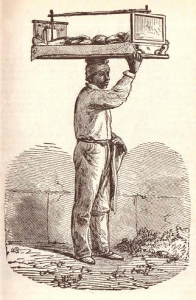 Importance of the Street

There are more corners like this one all over the various districts, creating ephemeral markets that benefit local economy. More importantly, this shows the appropriation of the street as an institution for public activities, whether festive, transit, political, or economic grounds. The absence of plazas and squares has often been a problem and no new developments steer to construction of such spaces.

Lima’s history reveals that colonial street culture embraced commerce flows in an informal fashion and has lasted for centuries. Before the newspaper kiosk was established as the early morning to mid-afternoon monument, before the sugar cane lady set shop next to the street lamp, long before the neighborhood grill parties started at the corners, in the 1600’s there was the famous “pregonero”, a more informal version of the town crier, walking the streets of Lima’s center announcing his products and selling them right on the sidewalk. The inherent public freedom of the street is, to an extent, the most valuable communal possession the citizens have. As public spaces, these corners of avenues and smaller streets are local socioeconomic stimulators and a symbol of solidarity.

In other parts of the world, an occupation like this one is considered clandestine and sanctioned under law due to accepted social conceptions of street usage that turned into strict regulations through legislative bodies. Lima’s center has implemented regulations for such actives: vendor uniforms, licensed carts, time brackets, etc.  The municipality has allocated street vending in Plaza Major, Paseo de Chabuca Granda or in front of the cathedral. The reasons behind the move include food safety, sanitation, tourism and the increasing automobile ownership. Despite the stiff enforcement, some areas are resisting change. Mesa Redonda in Lima’s Center, where the street vendor presence is excessive and has caused property issues with residents, car congestion, pollution and a surge of crime. On December 2001, Mesa Redonda was the site for one of the most devastating fires in the history on Lima, taking 277 lives and surpassing 500 wounded. Not counting on the hundreds missing and unidentifiable remains. The cause was the informal manufacturing and sale of pyrotechnic artifacts that ignited and unleashed a chain of explosions spreading rapidly through the streets which were overflowing with boxes of the same type of artifacts. Throughout the years following the disaster, many vendors were forced to migrate out of Mesa Redonda’s most trafficked avenue and today they occupy nearby alleys. The informality persists but now in narrower settings, like Cusco alley. 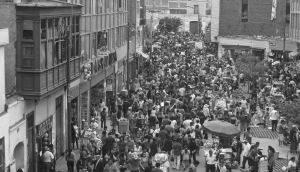 This is what Peru Avenue’s future looks like in the next 10 years if economic growth keeps up. Regulations will likely be placed to dictate where, when, and how the street can be occupied. For the moment, San Martin de Porres is still developing and corners would be an important part of the streets for locals that enjoy the accessibility of social contact and the variety goods at every crossing along the avenue.