ATLANTA (March 11, 2019) ­— The first of three new John Portman and Associates-designed office towers on Midtown’s West Peachtree Street is officially complete, and tenants are now lugging in furniture and lots of tech hardware. In the works for several years, the 21-story Coda project, a glassy, L-shaped building, stands between Spring and West Peachtree streets, just north of 4th Street.

It features 645,000 square feet of office space and 22,000 square feet of public-accessible, ground-floor restaurant and retail space. About 75 percent of the Tech Square development has been leased, according to Jack Portman, CEO of John Portman and Associates. The Portman design was crafted around a goal of interoffice cohesion—and not just for Georgia Tech students and scholars. Georgia Tech has claimed about half of the office space, although the school isn’t occupying contiguous floors, Portman architect Pierluca Maffey told Curbed Atlanta last week. Georgia Tech leaders were looking for a building “where tech industries can meet the academia that is developing new ideas in the technological environment,” he said, explaining why the school’s spaces are intersected by the offices of other tenants. Those include elevator giant Thyssenkrupp and electronics manufacturer Keysights Technologies.

Interestingly, Fortune 500 health benefits company Anthem was initially interested in taking up the office space that Georgia Tech didn’t need, but the developer didn’t want just two tenants; they were aiming to create a more cooperative, interactive community. “So we built a building just for them,” Maffey said of Anthem, which will occupy the under-construction 23-story building next door. Where both wings of the Coda tower unite, a 16-floor cylindrical protrusion houses the “collaboration core,” which is comprised of six three-story atria—the top atrium is slightly shorter—skewered by the world’s tallest spiral staircase, officials said. Two of those atria contain food and drink offerings, meaning Georgia Tech students and staff will inevitably rub elbows with tech industry professionals

The collaboration core is also wrapped in electrodynamic glass. Maffey said that should block glare and offer a great view of the Georgia Tech campus and Midtown. Elsewhere on the site: a bulky 80,000-square-foot data center, which tenants will utilize for high-speed computing. The north side of the data center is slated to feature “one of the largest murals of Atlanta,” according to Maffey. At street-level, expect a pedestrian plaza that cuts through the lower floors of the building. “The uniqueness about this opening: We’re going from Spring to West Peachtree [streets], but we’re doing it through the middle of our building at grade-level and at a height of four to six stories, depending on where you are,” Portman told Curbed. Visitors should look out for “a food hall that is slightly different than Ponce City Market and Krog Street Market,” said Maffey. “The idea is that we didn’t want to have just a normal corridor with stalls to occupy; it’s more of a village,” he said. “Every vendor has their own different corners. They’re positioned differently inside this meandering space.” Portman said most of the shops and restaurant spaces have been leased—Poke Burri is among the first food vendors announced—and that the plaza should be open to the public by late April or early May, when the official grand opening ceremony is scheduled to take place.

Additionally, coworking company WeWork will inhabit floors three and four of the south side of the tower. And thanks to tenant Thyssenkrupp, which is expected to be headquartered at The Battery in Cobb County by 2022, Coda contains North America’s first “twin-cab elevators,” Maffey said. Imagine two elevator cabs inside the same shaft moving independently of one another, he said. At first blush, that might sound like a model that would cause blockages, but the system allows users to select which floor they’re headed to before entering the elevator. Then, the system calculates how best to move groups of people. (In some cases, it will dock a cab at the bottom of the shaft, if the computer decides that’s the most efficient way to proceed.) Coda also has a five-story, 615-space parking deck buried beneath it. Next door, the Anthem project is anticipated to deliver about a year from now, and in the near future, Portman’s third office tower, 712 West Peachtree, is expected to break ground.

Images courtesy of the Portman Archives, photos by David Naughton. 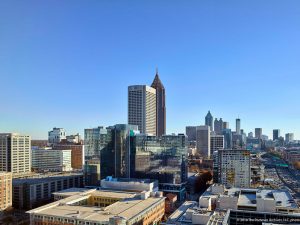 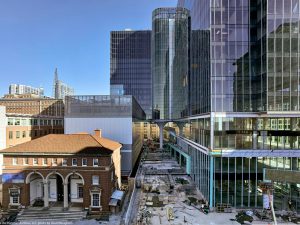 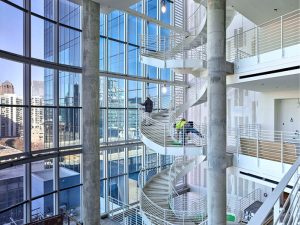