This two-project master-plan of the area in San Diego, California, known as “Lane Field,” is a study in the extension of the public realm, the creation of strong urban edges, the development of a new public waterfront park, and the creation of 800 new short stay and extend stay hotel rooms under three flags. Clad in a combination of floor-to -ceiling glazing and opaque panels, the coastline views are maximized and the solar gain minimized–reducing building energy usage.

Occupying a highly visible site at the intersection of Broadway and the waterfront of San Diego, the BRIC projects seek to extend the public spaces of the city to the waterfront. The B Street Corridor extends between the two projects as an urban garden link to the new waterfront park.

The Portman design delivers an integrated guest experience for both of these brands within one shared footprint. From the onset of this project, the emphasis was and is that of a project wholly integrated into the fabric of San Diego and its waterfront. The two brands share this connected experience. Integration into the San Diego environment gives authenticity to the project. BRIC Phase One, features a dual-branded hotel offering a 253-room SpringHill Suites and a 147-room Residence Inn, in addition to approximately 27,000 square feet of retail space. SpringHill Suites is a select service brand while Residence Inn is an extended stay brand in Marriott’s portfolio.

BRIC Phase Two, is a 400-key InterContinental Hotel with additional shops, restaurants and parking. Phase Two also offers the opportunity to create a tower that serves as an iconic gateway to Broadway and downtown while also minimizing the bulk of the mass over the site.

A waterfront re-connection integrating architecture and the public realm.

The master plan of the BRIC project addresses the question of how project built on the waterfront can become a connector–a link to the waterfront– rather than a barrier. Defining the urban edge at the waterfront, BRIC 1 and BRIC 2 link the waterfront to the city fabric through the Broadway plaza, the C Street auto court and retail garden, and the waterfront park. Each of the hotel towers is oriented perpendicular to the coast, maximizing the openness between the buildings to the city– linking the city visually to the water as well as physically through the enhanced public open space.

Public Involvement
Key to the success of projects of this scale and urban interaction is the understanding of the local place and culture. Through an extensive series of public interactions and meetings with the Coastal Commission, the Port of San Diego, and the local residents, the design team was able to create a project that is uniquely San Diego. We saw a rebirth of interest by the public to contribute their thinking to the design of the shared public space that we all enjoy as a part of our daily urban life. A series of public meetings organized by the Port were used to gather local knowledge and develop a working model of the overall disposition, materiality and composition of the project.

Successful strategies implemented that improved the outcome of the project.

Designing one of San Diego’s seminal waterfront projects presented a great opportunity to create a composition of building and public space that would function as a distinctive anchor at the waterfront as well as to present the opportunity for fine grain connections between the harbor and the city fabric. A public/private redevelopment plan between the Port of San Diego and Lane Field San Diego Developers brought in new infrastructure, retail and restaurant spaces, plus an additional public park to San Diego’s waterfront.

Economics
Unique to this two-building project are shared services, shared vertical transportation systems, and shared event spaces, which makes the dual brand model efficient in terms of both building construction economics and operating economics. From a pro-forma point of view, this project has far exceeded the performance values on which it was based, with ADRs and REVPAR exceeding expectations.

China Orient Summit Capital Co. provided the project’s equity financing and on its website, the company characterizes the Lane Field project site as, “the most visible and desirable location in  downtown San Diego.” It predicts that the InterContental will “deliver strong returns in this hotel market with limited supply.

The re-invention of a the Select Service Hotel Type.

There was a time when select service hotels would have been a stucco box at a suburban street corner, just off an expressway exit. This dual brand select service hotel was re-envisioned as an “Urban Select Service” type, which brought us to the idea of it as a mixed-use project, incorporating retail, parking and the two hotel flags into an energetic urban center. As a composition, the project includes ground floor perimeter retail with parking stacked above.

The retail component extends upward at the waterfront side as a series of terraces overlooking the waterfront park and out to the bay. A single central core anchors the building visually. The two hotel room towers are offset from one another, positioning the core as the change in plane meeting with the elevator core overlooking the bay–the result being spectacular views for the guests as they get on and off the elevators. Meeting rooms, food and beverage outlets, and a fitness center occupy the 5th floor and are open to the event terrace there. This shared function space and terrace are the social center for both brands.

Enclosure
The exterior enclosure of the project is based maximizing efficiency from a building area perspective as well as from an energy perspective. Composed of an inner and outer wall, the series of pushbacks in the buildings are directly related to the size of the rooms inside. King rooms, which were programmed to be smaller in square footage, use continuous floor to ceiling glazing maximizing views and increasing the apparent room size, while double queen rooms, employ larger floor-to-ceiling glazing alternating with opaque panels. Together, these two basic types form the patterned façade which reduces solar load, optimizes comfort and performance, while simultaneously providing views to the bay, the city ,and the coastline. The parking garage enclosure screen is based on the idea of the water drop; vertical profiled fins create this art piece wrapping (and concealing) the parking floors of the project.

The completion of the BRIC Master Plan.

BRIC Phase Two completes the master plan for the BRIC project. Together with BRIC Phase One, the two buildings define the new public realm through creation of defined street and spatial edges at the setback park, at the Broadway plaza, and at the C Street auto court/ connector. At the urban scale, this project follows the goals of the overall masterplan, those being providing a connection to the water, to the waterfront park and to the city. At the building scale, it seeks to be a part of the overall master plan while providing a separate and unique identity from the BRIC Phase One project. As a full-service hotel, contrasted with the BIRC Phase One project, this project contains more ballroom and meeting room space than its neighbor. Thus, the parking is located below grade with the ballroom and junior ballroom located in the podium.

The hotel features 400 guest rooms including 24 suites, along with 12,000 square foot ballroom and 35,000 square feet of total meeting room space. The hotel rooms tower is placed on the south edge of the site creating a strong street edge at the Broadway plaza. This placement opened the rooftop to the north as an event terrace, which essentially mirrors the event terrace of the BRIC Phase One project.

Enclosure
The enclosure for BRIC Phase Two was developed to provide a clear and separate identity for it in contrast to the BRIC Phase One project. The use of dark metal used in contrast to the light silver and the regular rhythm of the facade system differentiates this tower from first project. The entire project is defined spatially by the two towers, but each tower is distinguished in terms of identity and branding.

Economics
Simplicity of form, simplicity of structure, efficiency of planning, and performance engineering of the BRIC Phase Two project has created a project which places high value on the guest experience along with an equally high value of investor returns—accomplishing the developers’ goals. 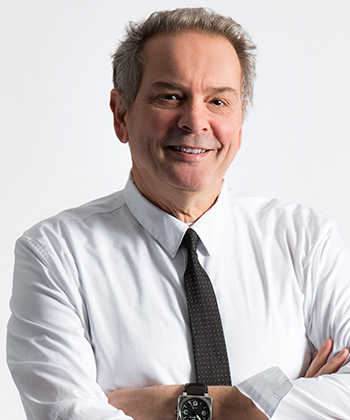 Gordon has built a distinguished career, working nationally and internationally on a broad range of building types including commercial, civic, transportation and mixed use developments since 1973. He’s always been deeply interested in the interdisciplinary connections that structure, technology, environmental concerns and transparency play in next-generation architectural thought – and it’s these values and ideas that continue to influence his work here.

Prior to joining Portman in 2007, Gordon worked at Murphy/Jahn for 23 years as a Senior Vice President/Principal Architect, leading some of the firm’s most recognized projects. This included worldwide projects such as Charlemagne in Brussels, Belgium, the Serono Corporate Headquarters in Geneva, Switzerland, Bishopgate Town in London, England and HALO Corporate Headquarters in Niles, Illinois. In addition to his career at Murphy/Jahn, Gordon’s worked at the firms Kahler Slater Engberg in Milwaukee, Wisconsin and Larson and Darby in Rockford, Illinois.

Gordon’s wide-ranging experience also extends to academia, having taught for the University of Wisconsin Milwaukee and the Illinois Institute of Technology. He’s also played a prominent role in numerous design reviews and juries at several universities.